Great Paxton is a much older place with a longer and more fascinating history than many are aware of, my first thought when I started to research the village history walks I lead was "I'm not going to have anything to say", when it came to it, the bigger problem was what to leave out to make it a sensible length.

A brief history of the village

Much of the early history of the village is unclear (no-one wrote it down). We think the village of Great Paxton arose shortly before the church was built n what is now farmland behind the church in the direction the camera is looking in the picture below, about halfway between the church and the river. Saxon coins were found in the ground when the railways were built in the 1840's.

The village then developed and spread up Church Lane extending to Adams Lane, then down the High Street and up London Lane which met with Adams forming a triangle. River Lane led then as now down to the river Great Ouse and in the opposite direction to Dovecoat Lane, previously known as Dovehouse Close and College Close before that. For hundreds of years the population of the village varied between about 200 and 450 people, most of whom lived in the triangle with the tip at Stub Cross, near where the spinney is now (picture below) the sides as London and Adams Lane and the High Street as the base. Most of this area was taken up with cultivated farmland and particularly as grazing for animals. 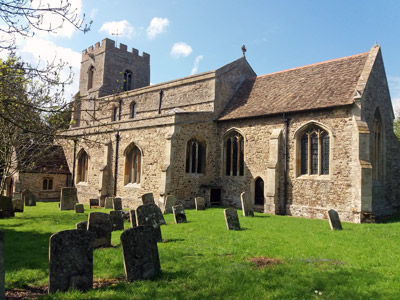 Great Paxton is a village of just over 1,000 people on the river Great Ouse in rural Cambridgeshire, England.

It is 59 miles north of London and well connected by the nearby A1 and A14 roads, St. Neots mainline railway station is 3 miles away.

The church was originally a cruciform (cross shaped) "Minster" with several priests who would have gone out across the countryside to bring the word of God to the people. It was significantly re-modeled around 1340-50 when the transepts (cross parts) were removed and the tower added at the western end, shortly followed by the bells. There was probably a short wooden spire above the "crossing", where the two pieces of the cross met and for much of its history, the roof will have been thatched.

While it appears to all be in harmony and built as we see it now, the church has undergone some significant changes several times in the past.

More about the history of the church 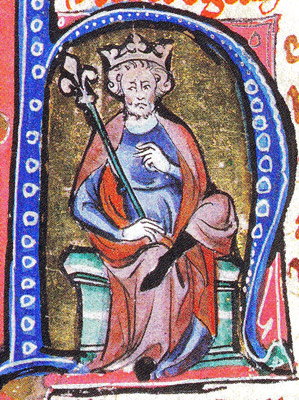 The time of the Saxons

In 1020 England was under Danish rule, King Cnut (Canute) was King of England and Denmark and in a few years would add Norway to his North Sea Empire, he would rule until 1042. 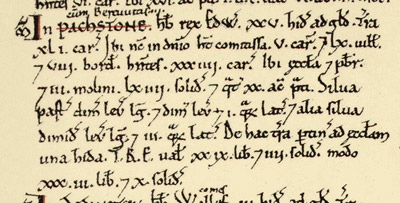 1086 and the Domesday (Doomsday) Book

The Domesday Book is essentially an account of the worth of England in terms of how much it could generate in taxes, ordered by William the Conqueror to establish the value of his newly acquired kingdom.

Great Paxton appears in the book as "Pachstone", it is a village of 69 households and was considered to be large and important at the time, from estimates of household size, there were probably between 240 and 350 people living here.

To put this into perspective the Offords at the same time had 25 and 29 households, Eynesbury had 76 and Cambridge just 31. Little Paxton didn't exist until about 1200 at which time the differentiation Magna Praxton arose, as a consequence of this being the site of the more important mother church. Great Paxton has been variously known (or at least written as) Pachstone, Parchestune, Pacstonia, Magna Paxton, Pastona, Paxton, Magna Praxton, Paxtone Parva and Muche Paxton. The origin of the name is unclear, the best bet is it was named after someone, though there is no record of exactly what this name was either. 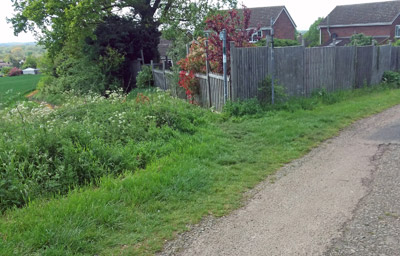 A historic part of Great Paxton. Stub Cross also formerly known as Berry Cross, and Mount Pleasant. The former site of the stub of the broken Saxon cross that currently stands in the church yard, it is thought it stood here as a marker to pilgrims coming to the "Mother" church of Great Paxton. London Lane goes to the left, at this point now just a narrow path along the edge of a field though formerly wide enough for a horse and cart, and Adams Lane to the right. The top of the triangle, now private houses and gardens was "Berry Green", a village green and meeting place in the past. 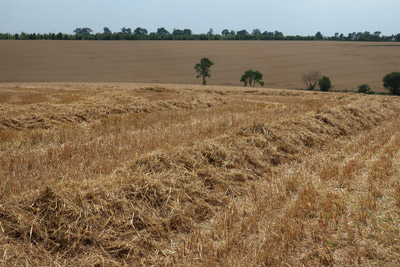 Farmland just outside the village. This land has been farmed from at least Iron Age times and probably for a long time before this too. The valley of the river Great Ouse provides a benign environment with a heavy clay soil which is drought-proof if farmed in the correct way, clay soils are also rich in nutrients. 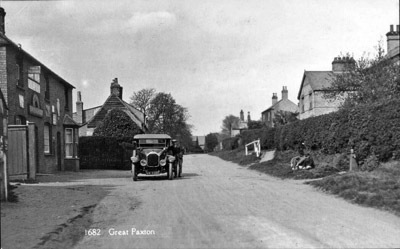 The High Street round about 1927 looking towards the road to the Offords. Note that it is essentially a "dirt" road with no markings, pavements or drainage and the absence of any overhead electricity or phone cables, though the village shop on the left advertises that it has a public telephone. 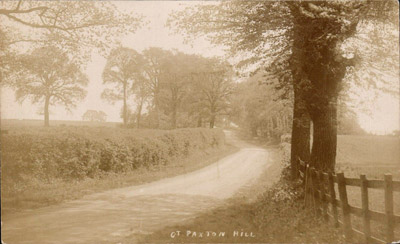 The road to St. Neots at the other end of the High Street as it goes up Paxton Hill, probably early 1920's