s part of the 1,000th birthday celebration of my village in 2020 I downloaded Saxon pictures and images for various uses. One of the sources of these was the Lindisfarne Gospels online. Here are letters I cut out for use for anyone else to use as well.

These letters are part of the text of the gospels, some of them are the illuminated first letters on a page, others are more simple. I cut out the clearest of them in decorated and plain forms for use online and also in laser engraved items that I made as part of our village celebrations. It's not an actual "font" as it isn't typeable, just a collection of images of the letters.

There isn't the whole modern alphabet as it didn't all exist at the time, there is no J, K, Q, V or W. One thing I did discover however is that almost all of the place names around where I live can be made with this reduced alphabet as the places are at least as old as the alphabet used in the Lindisfarne Gospels and so don't use the more modern letters. So if where you live is in the Domesday (Doomsday) Book you should be able to make the name with them, if you live in a new town or village, this is less likely.

Follows: The letters and some examples of how I've been using them at the bottom of the page.

These might be lower case "a" as Q wasn't part of the Anglo Saxon alphabet though it was the first letter of a word I took it from where every other letter was upper case.

Extra fancy larger letters, I brightened these up but haven't actually found a use for them!

J wasn't a part of the Anglo-Saxon alphabet so I assume this is probably an I.

I've been using them as the first larger letter or as an illuminated letter of a paragraph as at the top of this page and also for larger graphics and for laser engraving files.

My village is Great Paxton in Cambridgeshire, England, it is called Pachstone in the Domesday (Doomsday) book and has also been known as Pacstonia amongst other names in the last 1,000 years.

Here's a few examples of graphics I've made and used with what I think of as the "Lindisfarne Font".

With a white background

Background close to that of the Lindisfarne Gospels

Another name of the village

As above turned into black and white

As above but turned into black and white

Laser engraved onto the corner of a hardwood chopping board 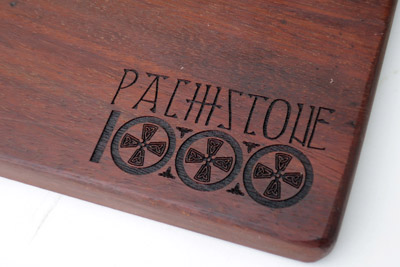 Another version with our 1000 logo 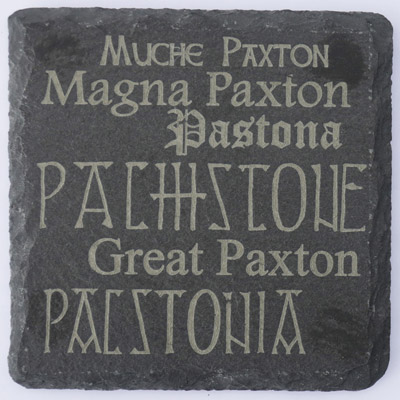 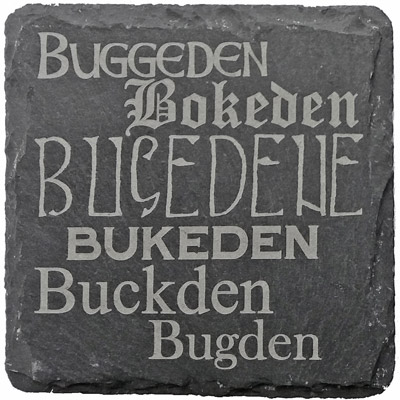 All changes to the original images including cutting out from the text and making them suitable for use in other contexts including cleaning of edges and enhancement of colours has been carried by me, the manipulated images are released here for free use. If you do use any of them, please credit and link to the British Library and also state that these are free use images. These are NOT to be included in any sold image bundles whether stand alone or behind a paywall.